Augmented Reality in a Contact Lens: It’s the Real Deal 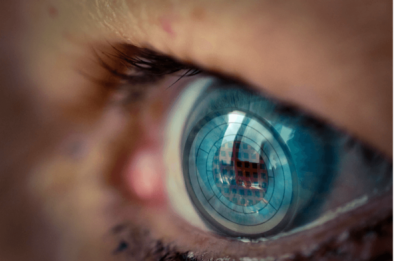 Augmented reality in a contact lens? Science fiction writers envisioned the technology decades ago, and startups have been working on developing an actual product for at least 10 years.

Today, Mojo Vision announced that it has done just that—put 14K pixels-per-inch microdisplays, wireless radios, image sensors, and motion sensors into contact lenses that fit comfortably in the eyes. The first generation of Mojo Lenses are being powered wirelessly, though future generations will have batteries on board. A small external pack, besides providing power, handles sensor data and sends information to the display. The company is calling the technology Invisible Computing, and company representatives say it will get people’s eyes off their phones and back onto the world around them.

The first application, says Steve Sinclair, senior vice president of product and marketing, will likely be for people with low vision—providing real-time edge detection and dropping crisp lines around objects. In a demonstration last week at CES 2020, I used a working prototype (albeit by squinting through the lens rather than putting it into my eyes), and the device highlighted shapes in bright green as I looked around a dimly lit room.

The effect was impressive and it was easy to see how useful this could be. Even people’s facial features were highlighted—not in extreme detail, but with enough resolution to distinguish a smile from a neutral expression. The company eventually plans to add the ability to zoom to its vision enhancement features, and announced a partnership with the Vista Center for the Blind and Visually Impaired to develop additional applications.

I also saw a demonstration of text displayed using the prototype; it was easy to read. Potential future applications, beyond those intended for people with low vision, include translating languages in real time, tagging faces, and providing emotional cues.

Mojo Vision has yet to implement its planned eye-tracking technology with the lenses, but says that’s coming soon, and will allow the wearer to control apps without relying on external devices.

“People can’t tell you are wearing it, so we want the interaction to be subtle, done using just your eyes,” Sinclair said.

The experience is different from wearing glasses, says Sinclair, who along with other Mojo Vision executives has been wearing the lenses. “When you close your eyes, you still see the content displayed,” he says.

The path ahead is not a short one; contact lenses are considered medical devices and therefore need U.S. Food and Drug Administration (FDA) approval. But the Mojo Lens has been designated as an FDA Breakthrough Device which will speed things up a little. And clinical studies have begun.

The company is well-funded for the journey. Based in Saratoga, Calif., Mojo to date has 84 employees and has pulled in US $105 million in investment from traditional Silicon Valley venture firms like Khosla Ventures as well as big companies like LG and Google. And its technology is well-protected, with more than 100 patents, Mojo said in a press release.

This article was originally published by: https://spectrum.ieee.org/view-from-the-valley/consumer-electronics/portable-devices/ar-in-a-contact-lens-its-the-real-deal?fbclid=IwAR3JxQQrn0VvPYodVWfWWeapNNB26P8cU3mnRHwkX17Y_ifIX0TwXn55wvo