A Cure for Cancer? How CAR T-Cell Therapy is Revolutionizing Oncology

CAR-T therapy has been hailed as a cure for cancer, but what really is this ‘miraculous technology’ and what can we actually expect from it?

The field of immuno-oncology is booming with billions of euros in investment. The ability to rewire our own immune system to fight cancer has certainly created huge expectations. After the success of the first checkpoint inhibitor drugs on the market, many are turning their attention to CAR-T cell therapy.

There are two CAR-T therapies already on the market. The field is now booming, with over 800 CAR-T clinical trials running. But is this therapy really a cure for cancer, as many seem to believe? Can the technology meet such high expectations? Are side effects a concern? Is it worth the huge price tag? To answer the most burning questions, I talked with some of the leaders in this field to draw an overview of the current state of CAR-T technology.

How does this ‘miracle cure’ work?

“CAR therapy is at the same time cell therapy, gene therapy, and immunotherapy. It represents a radical departure from all forms of medicine in existence until now,” Michel Sadelain, co-founder of Juno Therapeutics, told The Scientist.

A CAR-T therapy consists in the infusion of engineered T cells that carry a chimeric antigen receptor (CAR) on the cell membrane. The external domain of this receptor is designed to recognize a specific molecule on a tumor cell. When this happens, the internal signaling domain of the molecule is activated, stimulating the T cell to attack the cancer cell.

There are several generations of CARs, which carry additional internal domains that can further enhance the immune response against the programmed target.

The most common procedure for CAR-T cell therapy starts with the extraction of T cells from the patient being treated, a process called leukapheresis. The T cells are then genetically modified to express a CAR molecule and expanded. Finally, they are injected back into the patient, ready to fight the tumor. 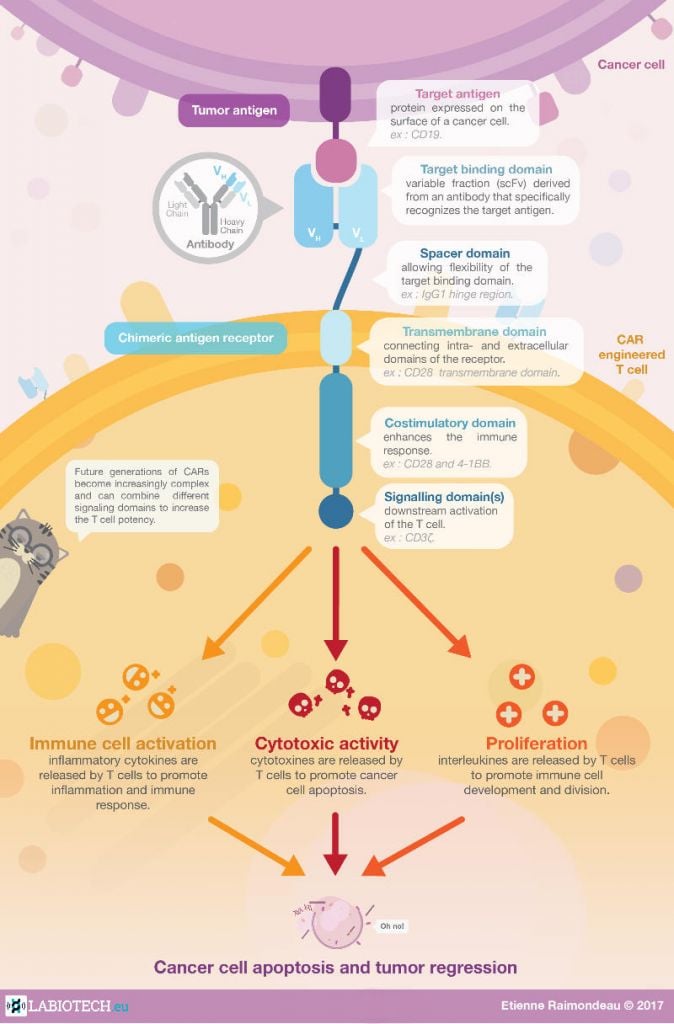 Check out the full CAR-T infographic

CAR-T clinical trials have shown huge remission rates, of up to 94%, in severe forms of blood cancer. This is particularly impressive considering most CAR-T clinical trials recruit cancer patients that have not responded to many if not all other available treatments. These results have fed the expectations of patients and investors alike, but it’s important to remember that the therapy can also have flaws.

André Choulika, CEO of French CAR-T developer Cellectis, put it bluntly: “I’m just trying to be realistic, CAR-T is not the miracle cure for cancer.”

Indeed, CAR-T cells have in fact been linked to severe and even lethal side effects, such as neurotoxicity and cytokine release syndrome. In 2016, several companies reported multiple deaths in late-stage clinical trials with CAR-T therapies. This made many realize that the technology might not be as perfect as they had originally expected.

These deaths were reported in trials testing CAR-T therapies against the CD19 antigen found in immune B cells — the most studied target in the CAR-T field. Both CAR-T therapies currently on the market target CD19 to treat several forms of cancers affecting B cells, such as lymphoma and leukemia.

“The initial furore and excitement of CAR-T have led to extensive and rapid clinical development in the CD19 target space,” David Gilham, R&D VP at Belgian CAR-T company Celyad, told me. “Research is busy catching up at the moment, in particular concerning toxicity. The lack of good preclinical models hampers this work, but with clinical samples available, ongoing investigations are now closer to identifying the underlying mechanisms and further refining the approach.”

Novartis was the first to launch a CAR-T therapy, called Kymriah, in 2017. This one-time treatment for B-cell acute lymphoblastic leukemia (ALL) has shown an 83% remission rate after three months in patients that do not respond to standard treatments. However, 49% of the patients suffered strong cytokine release syndrome, a side effect that has been responsible for several deaths in clinical trials run by Novartis’ competitors. For example, Juno Therapeutics had to terminate its lead CAR-T program back in 2017 after a total of 5 patients died of brain bleeding caused by the therapy.

Gilead was the second to bring a CAR-T therapy to the market. The big pharma acquired CAR-T developer Kite Pharma just weeks before the FDA approved its CAR-T cell therapy, Yescarta. The therapy induced remission in 72% of patients with a rare form of blood cancer called aggressive B-cell non-Hodgkin lymphoma. However, the company reported three deaths linked to the side effects of the therapy.

Other companies running clinical trials with CAR-T therapy include Autolus and TC Biopharm in the UK, Cellectis in France, Celyad in Belgium, as well as Celgene and Mustang Bio in the US.

Despite severe side effects and several deaths in clinical trials, some argue that CAR-T therapy is worth the risk for patients who don’t respond to any other available treatments. But CAR-T developers are already developing next-generation CAR T-cells that are safer for patients.

One of them is Cellectis. The company developed a CAR-T technology, now licensed to Servier and Allogene, that includes a switch control system that only activates the engineered T cells when the patient is given a drug. The therapy is in phase I trials, after saving two babies with aggressive forms of leukemia in compassionate cases. Bellicum Pharmaceuticals, in the US, is developing a similar technology called GoCAR-T that requires the drug rimiducid to activate the CAR T-cells. 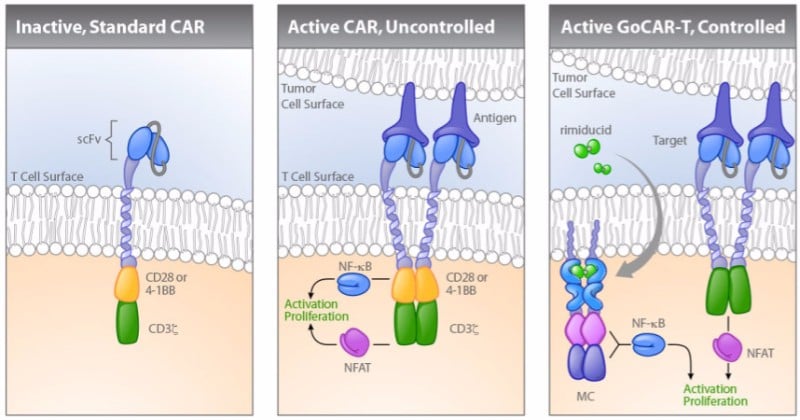 For its part, Celyad is developing a version of CAR-T that makes T cells carry the receptor of another type of immune cell called natural killer cells. “It’s disruptive because the receptor binds to eight different ligands that are expressed on above 80% of solid and hematological malignancies,” Christian Homsy, co-founder of Celyad, told me. “We’ve started one of the largest and broadest trials in the sector, targeting seven indications.”

If successful, Celyad’s CAR-T cells would address one of the big challenges in the field of immuno-oncology: targeting solid tumors. In these cancers, the amount of T cells that infiltrate naturally is low, and the tumor cells create an immunosuppressive environment that dampens the immune response.

Bluebird bio, in partnership with Scottish biotech TC Biopharm, is also targeting solid tumors with an improved version of CAR-T that uses a specific class of T cells known as gamma delta T-cells. They selectively target cancer cells without attacking healthy cells, which could significantly reduce the toxicity of the therapy.

Another strategy is to combine CAR T-cells with other types of cancer immunotherapy. For example, by infusing them along with checkpoint inhibitors that block cancer’s defense mechanisms against T cells, their efficacy could be improved and the dose lowered.

Zelig Eshhar, Professor at the Weizmann Institute of Science in Israel and pioneer of CAR-T technology, has stated that he will be investigating these combinations of CAR T-cells and checkpoint inhibitors. A drawback of this approach, however, could be making CAR-T therapy’s already prohibitive pricing even higher.

The pricing of the two CAR-T therapies already in the market has sparked debate. Novartis’ Kymriah is priced at €320,000 in Germany and Gilead’s Yescarta at €350,000 in France. Experts estimate that, after factoring in the hospitalization and other medications required for the procedure, the total goes up to over €1M per patient.

One big goal in the CAR-T field is the development of an allogeneic CAR-T therapy. That is, sourcing T cells from a healthy donor so that they are ready to go when the patient needs them, as opposed to engineering each patient’s T cells individually.

Cellectis has been the first to test two of these off-the-shelf CAR T-cell therapies in clinical trials, although there have been doubts over whether the technology can reach the same level of success as when using cells from the patient.

Celyad is also working on off-the-shelf CAR-T therapies. Preliminary results of its first study in humans seem so far promising, with no severe toxicity reported.

The technology would save precious time to patients, which currently have to wait for about two weeks while their cells are shipped to the manufacturing facilities, engineered, and returned. But developing an off-the-shelf therapy is a “scientifically challenging avenue” according to Celyad’s co-founder Christian Homsy.

“I doubt that allogeneic CAR-T can be a real off-the-shelf therapy,” he told me. “There are still some significant scientific challenges with regards to immunology, as well as manufacturing, transportation, traceability and banking solutions necessary to reach the scale needed for widespread patient treatment.”

While scientists figure out how to overcome technical challenges, the therapies also face challenges in term of regulations. As a brand new type of therapy, CAR-T cells fall between several regulatory frameworks, which can widely vary from one country to another.

The challenges are many, and the technology is clearly not perfect yet, but CAR-T cells offer hope for patients that had none before. With the first therapies already in the market, the way is open for more and better alternatives to arrive in the next few years.

This article was originally published on January 2018 and has since been updated. Images from Shutterstock; Klebanoff et al. (2014) Nature Reviews Clinical Oncology 11, 685–686; Bellicum Pharmaceuticals

This article was originally published by: https://www.labiotech.eu/features/car-t-therapy-cancer-review/