This is the world’s largest 3D-printed house 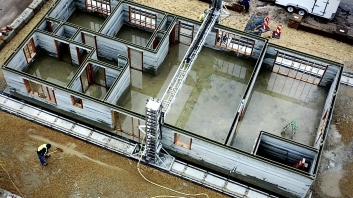 SQ4D has just 3D-printed an impressively large home, and indeed is claiming that the 1,900 square foot abode is the ‘largest permitted 3D-printed home in the world’, no less.

While larger buildings have been constructed with 3D printing – including this two-storey affair in Dubai, which at almost 7,000 square feet holds the official world record – this is certainly one of the biggest houses we’ve heard about, and it was created at an impressive lick of speed.

SQ4D printed the house in 48 hours, albeit spread across eight days, and it was created right there on-site. That’s quick when you compare it to previous projects such as the 3D-printed houses in Mexico which were 500 square feet and took 24 hours to make.

Furthermore, SQ4D pegs the cost of the construction materials at less than $6,000 (around £4,600). The building work was carried out by the company’s Autonomous Robotic Construction System (ARCS).

Faster in the future

SQ4D is a division of S-Squared 3D Printers, and the firm claims that with recent enhancements to its ARCS tech which were implemented after this particular project, the time taken to 3D-print future houses will be cut in half, no less.

The firm further notes that building with concrete is not only cost-effective, but safer in terms of the finished home being more fire-resistant, and indeed more resistant to the ravages of time in general.

ARCS is capable of constructing foundations, utility conduits, and both exterior and interior walls. It also uses far less energy than traditional construction methods, so is environmentally-friendly, and labor requirements are reduced to as few as three workers.

There’s a great deal happening with 3D printing in the construction industry in recent times, including building eco-houses (partly) out of mud.

The speed of construction is one of the big plus points with using 3D printing technology, and if SQ4D can indeed deliver on making its already quick building process twice as fast, that’ll be a major step forward.

This article was originally published by: https://www.techradar.com/news/this-is-the-worlds-largest-3d-printed-house