This med student was given last rites before finding a treatment that saved his life. His method could help millions

It was just after Christmas in 2013 and David Fajgenbaum was hovering a hair above death.

He lay in a hospital bed at the University of Arkansas, stricken with a rare disease. His blood platelet count was so low that even a slight bump to his body could trigger a lethal brain bleed. A doctor told him to write his living will on a piece of paper.
Fajgenbaum was rushed to a CT scan. Tears streamed down his face and fell on his hospital gown. He thought about the first patient who’d died under his care in medical school, and how her brain had bled in a similar way from a stroke.
He didn’t believe he’d live out the scan.
But he did. Turns out his headache wasn’t a brain bleed — just sinus pressure. The chemo had kicked in.
Fajgenbaum was battling Castleman disease, a rare autoimmune disorder involving an overgrowth of cells in the body’s lymph nodes. It wasn’t the first time a relapse had threatened his life. Massive “shock and awe” chemotherapy regimes had helped him narrowly escape death during four previous attacks, but each new assault on his body weakened him.
“You learn a lot by almost dying,” he says.
He learned enough to surprise his doctors by coming up with a way to treat his disease. Almost six years later he’s in remission, he and his wife have a baby girl and he’s devoting his medical career to saving other patients like him.
Fajgenbaum, 34, recounts his near death and remarkable recovery in a new book, “Chasing My Cure: A Doctor’s Race to Turn Hope into Action.”
His story has lessons for the future of rare disease research — and for living.

His first love was football

As a boy in Raleigh, North Carolina, Fajgenbaum spent Saturdays on the sidelines watching the NC State Wolfpack with his dad, the team’s doctor.
At age 7, he was obsessed with becoming a Division 1 athlete. In middle school he would wake up at 5 a.m. to go running. The walls of his bedroom were covered with football play charts. 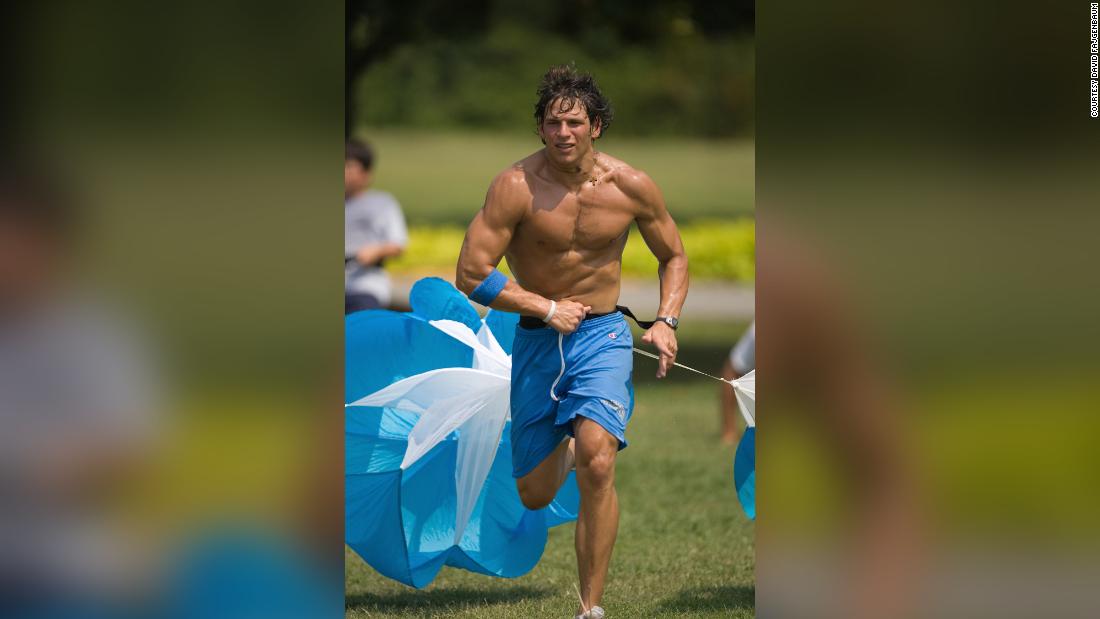 David Fajgenbaum training for football at Georgetown University.
He achieved his dream, making the Georgetown University football team as a quarterback. But during his sophomore year in 2004, his mother died of cancer.
His obsessive focus deepened, helping him learn to appreciate life’s precious moments and understand bad things can still happen to good people.
“I know people far more worthy of miracles than I am who haven’t gotten them,” he says.
Fajgenbaum then earned a master’s degree at Oxford University, where he learned how to conduct scientific research so that he could fight the disease that took his mom.
That relentless focus and scientific rigor would one day save his life.

In medical school a rare disease nearly killed him

Fajgenbaum entered medical school at the University of Pennsylvania to become a doctor like his father — specifically, an oncologist, in tribute to his late mother.
During his third year, in 2010, he got very sick and was hospitalized for five months. Something was attacking his liver, kidneys and other organs and shutting them down.
The diagnosis was idiopathic multicentric Castleman disease.
First described in 1954, Castleman presents partly like an autoimmune condition, and partly like cancer. It’s about as rare as ALS — there are about 7,000 new cases each year in the US.
The disease causes certain immune signaling molecules, called cytokines, to go into overdrive. It’s like they’re calling in fighter jets for all-out attacks on home territory.
Fajgenbaum’s doctors knew his body was in a civil war, but they had questions about how and why. 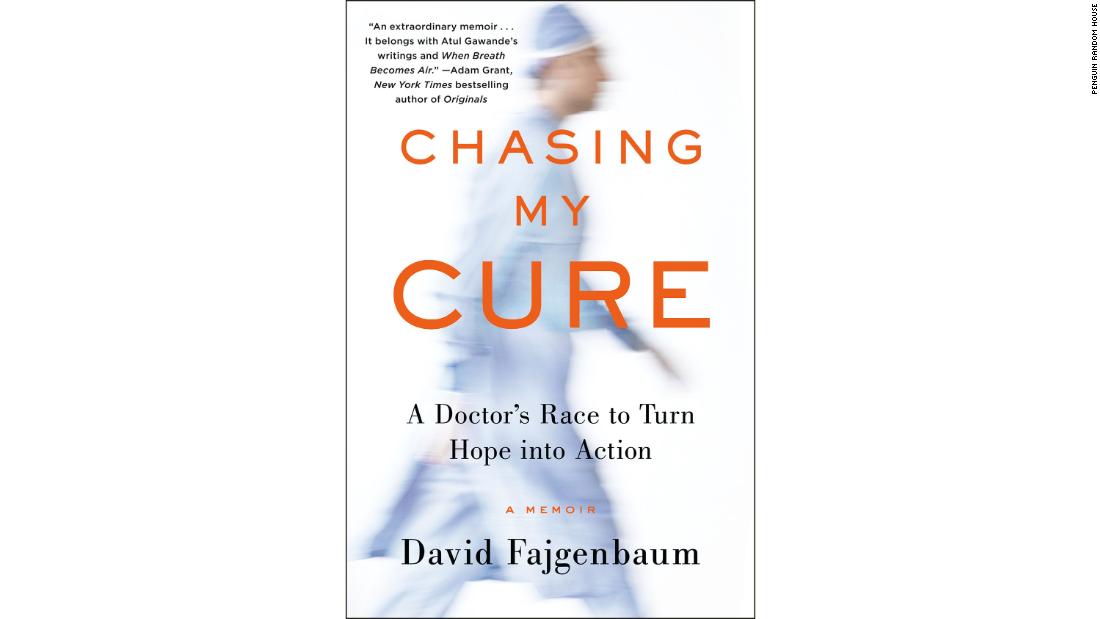 Fajgenbaum’s book, an account of his illness and recovery, came out this week.
In his hospital bed, Fajgenbaum felt nauseated and weak. His organs were failing and he noticed curious red spots on his skin. But his doctors, focused on saving his life, weren’t interested in these “blood moles.”
He asked each new doctor who came in his room what the blood moles meant.
“They went out their way to say they didn’t matter,” Fajgbenbuam says. But the med student-turned-patient would go on to prove he was on to something.
“Patients pick up on things no one else sees,” he says.

Castleman disease struck Fajgenbaum four more times over the next three years, with hospitalizations that ranged from weeks to months.
But even with a top Castleman specialist treating him, there were many unknowns. Fajgenbaum stayed alive only through intense chemotherapy “carpet bombing” campaigns.
As he repeatedly faced down death, he grieved most for the memories he still hadn’t made: graduating from medical school, marrying his college sweetheart and looking into his son or daughter’s eyes. 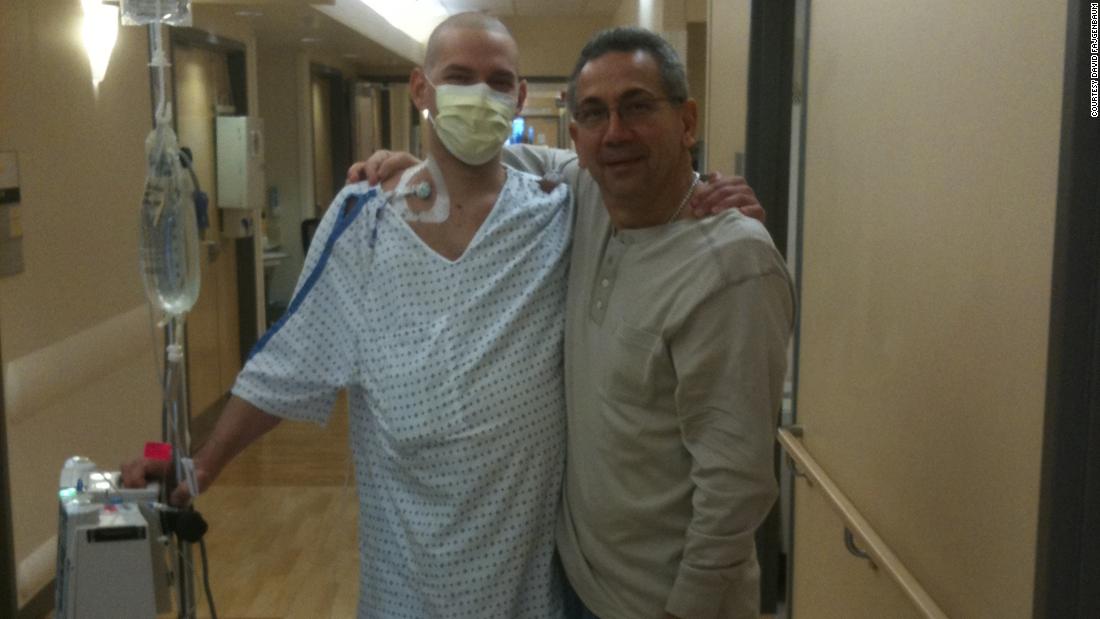 David Fajgenbaum poses with his father during one of his hospital stays.
During one relapse at a Duke University hospital, his family called in a priest to read him his last rites.
After all the setbacks, all the organ failure, all the chemo, Fajgenbaum worried that his body would simply break.
Despite four hospitalizations, he managed to graduate from medical school. His life depended on it.

He needed to change how medical research is done

Rather than starting a residency like most of his medical school classmates, Fajgenbaum began an MBA at Penn’s Wharton School in 2013.
He also founded the Castleman Disease Collaborative Network, a global initiative devoted to fighting Castleman disease. Many of his business-school classmates joined the cause. Fajgenbaum figured that adding a CEO mindset would enable him to scale up his approach to curing himself.
Coordinating data-sharing efforts between labs required him to use “every negotiation, strategic decision-making and managerial economics course I took in business school,” he wrote in his book.
Through the CDCN he began bringing the world’s top Castleman disease researchers together for meetings in the same room. His group worked with doctors and researchers as well as patients to prioritize the studies that needed to be done soonest.
Rather than having people apply for grants, they hand-pick the best researchers to investigate Castleman. 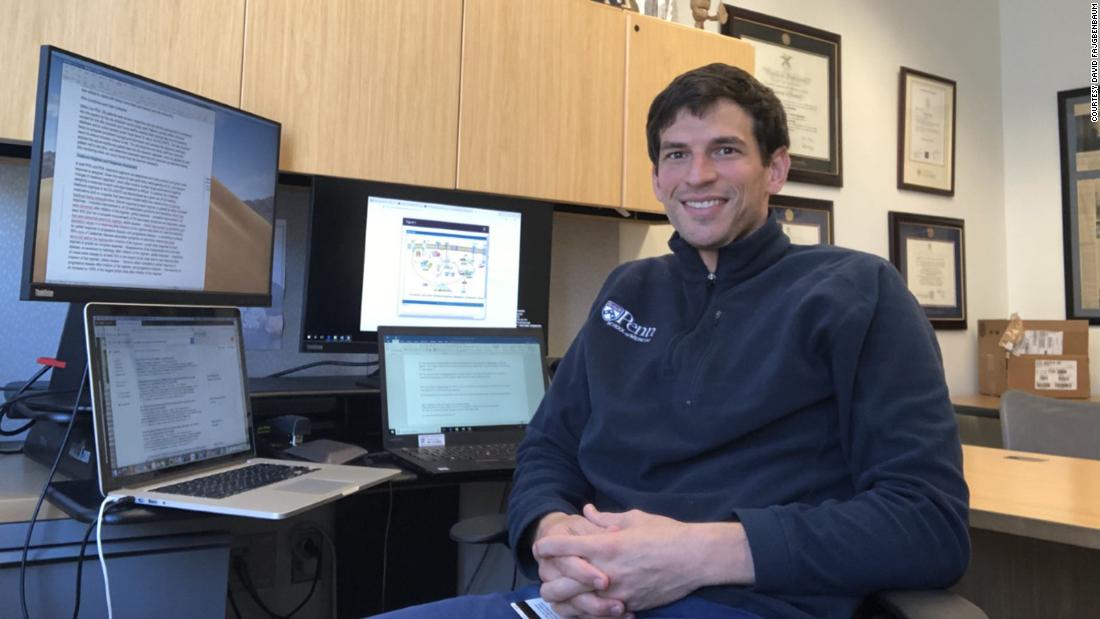 A recent photo of Fajgenbaum in his office at the University of Pennsylvania.
Fajgenbaum also prioritized clinical trials that re-purposed drugs the FDA had already approved as safe rather than starting from scratch with new compounds.
Meanwhile, he never knew if the next relapse might finally kill him. Staving them off meant flying to North Carolina every three weeks to receive chemotherapy treatments.
Even so, he proposed to his college sweetheart, Caitlin Prazenica, handing her a letter written from his niece to her “Aunt Caitlin,” that said, in part, “I’m a really good flower girl.”
“The disease wasn’t a hindrance to me,” says his now-wife. “I just wanted to be together.”
But in late 2013 Castleman struck again, landing him in that Arkansas hospital. It marked his closest brush with death yet.

He pioneered a brand new treatment

Before he and Prazenica could send out their save-the-date postcards, Fajgenbaum set out to try and save his own life.
After examining his medical charts, he zeroed in on an idea that — more than 60 years after Castleman disease was discovered — researchers hadn’t yet explored.
A protein called vascular endothelial growth factor, or VEGF, was spiking 10 times its normal level. In medical school he’d learned VEGF controls blood vessel growth, and he hypothesized that the blood moles that had shown up with every Castleman relapse were a direct result of that protein spike, which signals the immune system to take action.
He also knew that there was an immunosuppressant called Sirolimus that was approved by the FDA to help fight the immune system when it activated against kidney transplants.
After consulting with a National Institutes of Health expert, Fajgenbaum asked his doctor to prescribe the drug. He picked it up in February 2014 at a pharmacy less than a mile from his home.
“A drug that could potentially save my life was hiding in plain sight,” he says. 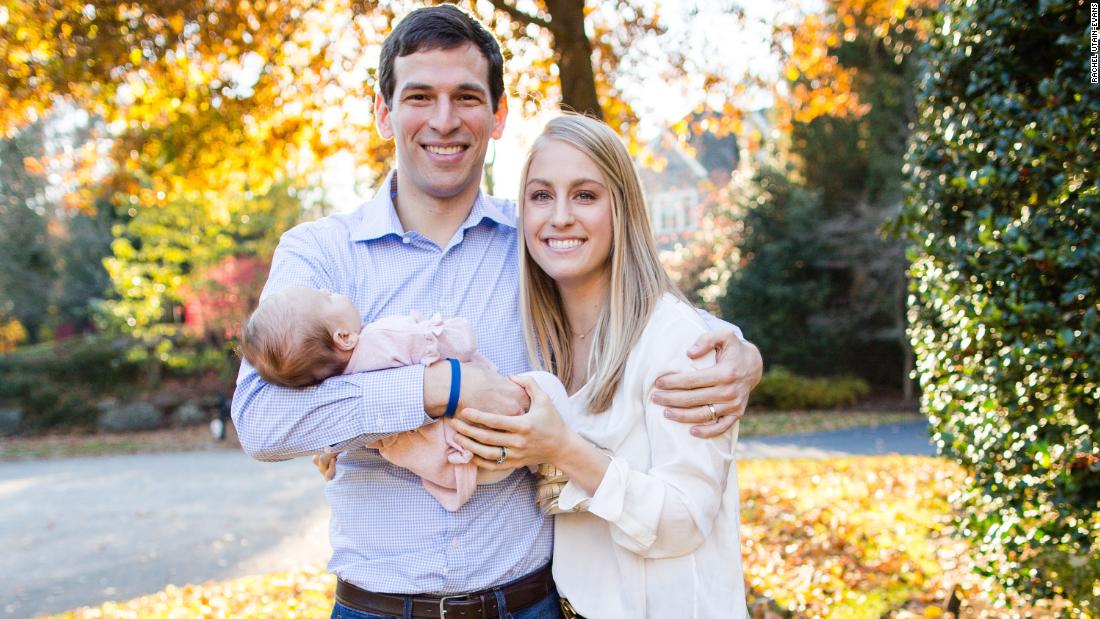 Fajgenbaum with his wife Caitlin and their daughter Amelia. The couple were wed in 2014.
So far it’s working. Fajgenbaum has been in remission from Castleman for more than five years. He’s not the muscular football player he once was, but he’s close to full strength.
After three months on Sirolimus, he and Caitlin were wed in a Philadelphia ballroom, their joy amplified by memories of their struggles.
Fajgenbaum is now an assistant medical professor at the University of Pennsylvania, running a research lab and enrolling patients in a clinical trial for the drug that’s given him his life back.
He finished the draft of his book in August 2018, in time for the birth of their daughter, Amelia.
“She’s such a little miracle,” Caitlin Fajgenbaum says. “We’re so lucky to have her.”

His approach to research can be applied to all rare diseases

There are 7,000 rare diseases affecting 400 million people around the world, according to Global Genes. And just 5% have an FDA-approved treatment.
Fajgenbaum says there’s tremendous opportunity for him and others to change that.
“Because so little time and money has been invested in these diseases, there’s a lot of low-hanging fruit,” he says.
His efforts have come to attention of the Chan Zuckerberg Initiative, created by Facebook co-founder Mark Zuckerberg and his wife, Dr. Priscilla Chan, to treat, manage, and prevent all diseases by the end of the century.
The organization’s science policy director, Tania Simoncelli, told CNN it’s highlighting Fajgenbaum’s CDCN as a model for how to rally a community together to best a rare disease. 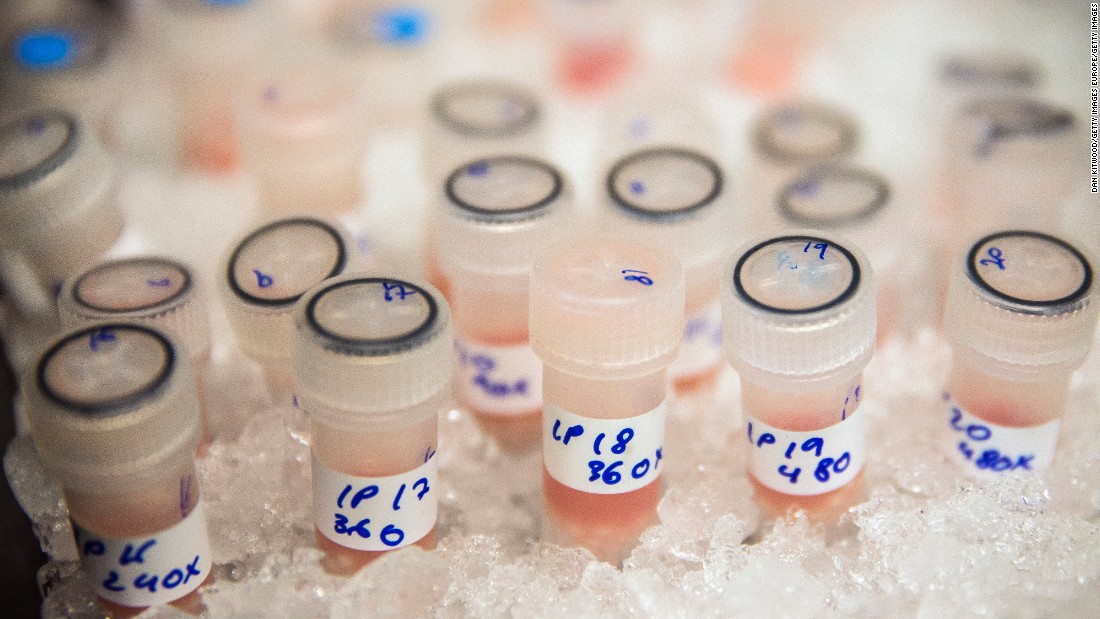 “I haven’t seen anyone tackle a disease with that level of organization,” she says. “He didn’t wait for the stars to align. He aligned them himself.”
Research for many rare diseases suffers because there isn’t a disease-wide plan and a “quarterback” to lead it, Simoncelli says.
So for the last 10 months Fajgenbaum’s group and the CZI have been working together to help rare-disease communities bring together patients, researchers and doctors to get the right research done as fast as possible.
“Part of his brilliance is that his model can be turned into a series of steps,” Simoncelli says.
Fajgenbaum hopes his story offers lessons, far beyond medicine, about what people can do when they’re backed against a wall.
And he feels his suffering means something when he looks in the eyes of his patients with Castleman disease. One girl named Katie was diagnosed at age 2 and endured 14 hospitalizations.
Then her doctor prescribed Fajgenbaum’s drug after the family reached out to the CDCN. Katie hasn’t been hospitalized since and just graduated from kindergarten. She’s even learned how to ride a bike.
This article was originally published by: https://edition.cnn.com/2019/09/14/health/castleman-fajgenbaum-chasing-my-cure-wellness-trnd/index.html
Advertisement