Cornwall, 1864. A hot spring is discovered nearly 450m (1,485ft) below ground in the Wheal Clifford, a copper mine just outside the mining town of Redruth. Glass bottles are immersed to their necks in its bubbling waters, carefully sealed and sent off for testing. The result is the discovery of so great a quantity of lithium – eight or 10 times as much per gallon as had been found in any hot spring previously analysed – that scientists suspect “it may prove of great commercial value”.

But 19th-Century England had little need for the element, and this 50C (122F) lithium-rich water continued steaming away in the dark for more than 150 years.

Fast forward to autumn 2020, and a site nearby the Wheal Clifford in Cornwall has been confirmed as having some of the world’s highest grades of lithium in geothermal waters. The commercial use for lithium in the 21st Century could not be clearer. It is found not only inside smart phones and laptops, but is now vital to the clean energy transition, for the batteries that power electric vehicles and store energy so renewable power can be released steadily and reliably.

Demand has soared in recent years as carmakers move toward electric vehicles, as many countries including the UK, Sweden, the Netherlands, France, Norway and Canada announce a phase-out of combustion-engine cars. In fact, five times more lithium than is mined currently is going to be necessary to meet global climate targets by 2050, according to the World Bank.

But there’s one big problem. Obtaining lithium by conventional means takes its own environmental toll, or rather three: carbon emissions, water and land.

Lithium is currently sourced mainly from hard rock mines, such as those in Australia, or underground brine reservoirs below the surface of dried lake beds, mostly in Chile and Argentina. Hard rock mining – where the mineral is extracted from open pit mines and then roasted using fossil fuels – leaves scars in the landscape, requires a large amount of water and releases 15 tonnes of CO2 for every tonne of lithium, according to an analysis by the raw materials experts Minviro for the lithium and geothermal energy firm Vulcan Energy Resources. The other conventional option, extracting lithium from underground reservoirs, relies on even more water to extract the lithium – and it takes place in typically very water-scarce parts of the world, leading to indigenous communities questioning their sustainability.

Extracting lithium from geothermal waters – found not just in Cornwall, but Germany and the US as well – has a tiny environmental footprint in comparison, including very low carbon emissions. 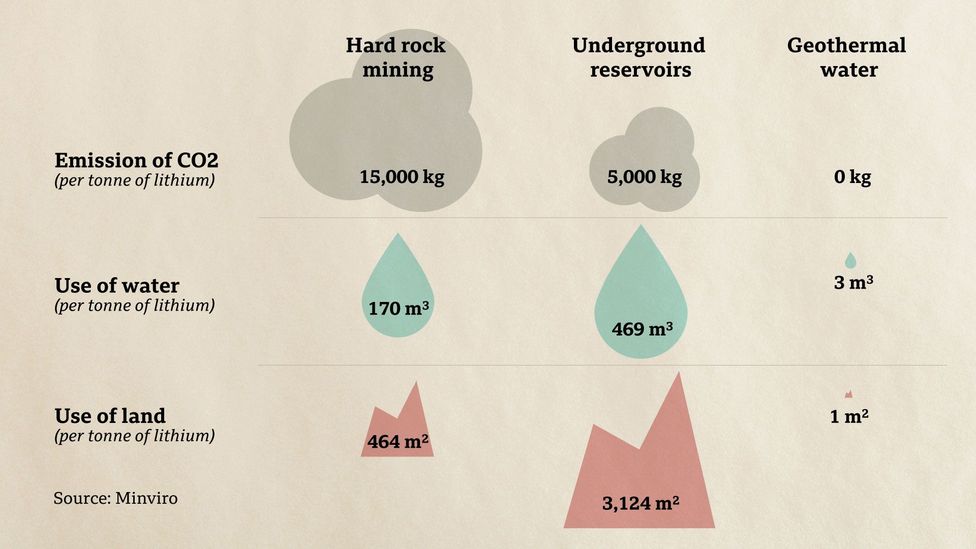 Geothermal brine is a hot, concentrated saline solution that has circulated through very hot rocks and become enriched with elements such as lithium, boron and potassium. In other words, the energy-intensive process of extracting lithium from solid rock is powered by naturally occurring geothermal energy. The brine in the Cornish mines has concentrations of up to 260 milligrams per litre, flowing at a rate of between 40-60 litres (8.1 to 13.7 gallons) per second. That works out as about enough lithium for a typical smartphone battery (2-3g) passing through the production process every few seconds, according to Cornish Lithium’s estimates.

Everyone has a lot of stars in their eyes, it’s like a new gold rush – William Stringfellow

The demand for lithium with a lower environmental footprint appears to be gaining ground. There are signs car manufacturers including Mercedes-Benz and Volkswagen are starting to think about the environmental and social impact of their electric vehicle supply chain, says Alex Keynes, clean vehicles manager at Brussels-based campaign organisation Transport and Environment. Using lithium that is already in circulation – from recycled batteries and electronics – is preferable to mining more, says Keynes. “Given the enormous demand we’re likely to see over the coming years, [it] is going to mean we need some extraction, and recovering lithium from geothermal brine looks very promising,” says Keynes.

The 1864 discovery of lithium might finally be about to bear fruit. Cornish Lithium, a company set up by former investment banker Jeremy Wrathall in 2016, is working on plans to extract potentially significant lithium resources from the brine in the region’s famous mines near Redruth.

It has two main sites under development – one is at a deep geothermal plant, where it is collaborating with the energy developer Geothermal Engineering. The energy firm already plans to produce zero-carbon heat and power from the same hot water that contains the lithium, 5.2km (3.2 miles) underground at the United Downs Deep Geothermal Power Project. The water at this site also has low levels of sodium and magnesium compounds, which is a promising sign as these minerals make lithium extraction more difficult and expensive. In August, the project won £4m ($5.3m) backing from the UK government, allowing a pilot lithium extraction plant to be built in the next couple of years. 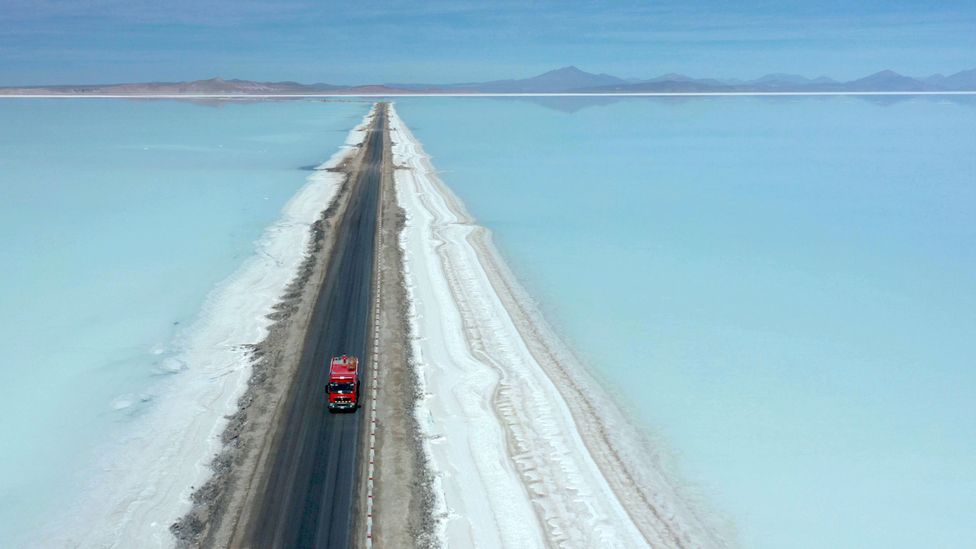 Large quantities of lithium currently come from reservoirs in South America, but this method is water-intensive (Credit: Getty Images)

The second geothermal lithium site sits next door to the United Downs project, and assessments of the potential for lithium extraction at a shallower depth of around 1km (0.6 miles) are underway. The company is also exploring the potential to extract lithium from granite rock in the China Clay region of Cornwall, near St Austell.

The extraction of the lithium from Cornwall’s geothermal waters has been made possible by technological advances in both exploration and extraction, says Cornish Lithium’s senior geologist Lucy Crane.

The team is using a variety of data sources to identify the most likely locations of the lithium. “Cornwall has an amazing mining heritage going back 4,500 years, which means there’s a hell of a lot of information out there about the sub-surface,” she says.

Some of the historical maps are hand-painted on large pieces of vellum (animal skin used historically for writing). Cornish Lithium’s archivists take photos of it, and digitally stitch it together so that the geological information can be captured in 3D. That allows data from the 1860s, 1900s and 1960s to be combined and overlaid with modern information from satellites and drones.

“This is a really powerful way of combining datasets, and allows you to efficiently target where you want to do on-the-ground exploration,” says Crane. “Then when we come to drilling, we’re as sure as we can be that we’re going to find something. That’s better from an economic point of view, but also minimises the environmental impact of the exploration process.” 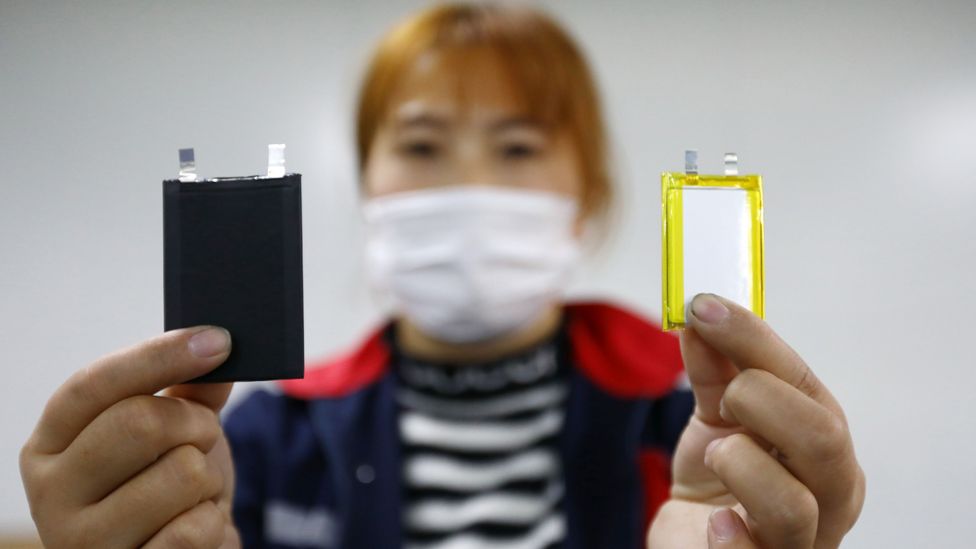 Lithium ion batteries are used to power electronic devices and store energy generated from wind and solar power, among their many other uses (Credit: Getty Images)

Technological advances are also helping to make it possible to extract lithium from brine. The team is planning to use a technique called Direct Lithium Extraction (DLE), which has been developed by various companies in the US, Germany and New Zealand.

There are as many as 60 variants of DLE technology, according to Jade Cove, a San Francisco-based advisory firm tracking new mining and energy technology. But the basic process involves using techniques such as nanofiltration or ion-exchange resins – which act like a chemical sieve to selectively collect just lithium chloride (the main form in which the lithium is found in the brine), leaving other salts in the water. The lithium chloride is retrieved from the sieve by, for example, washing the resin beads with pure water and injecting the remaining water back into the ground through boreholes. The lithium chloride is then purified and concentrated to produce lithium hydroxide, which is used to make batteries.

But this is not the only way to get lithium from geothermal brine. In the US, William Stringfellow, director of the Ecological Engineering Research Program at Lawrence Berkeley National Laboratory in the US, is undertaking research for the US Department of Energy on the different methods for extracting lithium from brine. One approach is to extract lithium from brines using solvents designed to collect lithium ions, while others include the use of membranes that only allow lithium ions to pass, and electrochemical separation, where lithium ions are drawn to charged electrodes.

“So DLE isn’t necessarily going to be the only technology, but it’s the first one that’s being applied,” says Stringfellow.

Each method has one main stumbling block to navigate – getting only lithium out of the water. “There’s a lot of other materials in the brine that potentially interfere with the lithium extraction process [such as sodium and magnesium], so you have to control those and remove them,” says Stringfellow.

The US and Germany are also hotbeds of research and development on geothermal lithium extraction. The area around the Salton Sea, a shallow lake in the centre of California and the second largest geothermal field in the US, has been dubbed “lithium valley”. The California Energy Commission has estimated that the field could provide 40% of global lithium demand.

In research published in March this year, the commission forecast the region’s lithium carbonate supply at more than 600,000 tonnes a year, which could generate US$7.2bn (£5.3bn) a year at around US$12,000 (£8,885) a tonne. The hope is that lithium extraction could not only provide a cleaner, domestic source of lithium for batteries, but also significantly improve the economics of renewable power production from geothermal resources, which currently produce only 6% of California’s electricity and are expensive to develop.

“Everyone has a lot of stars in their eyes, it’s like a new gold rush,” says Stringfellow. “It is an economically depressed area, so people are very excited about the fact that if they get lithium going, it would lead to an economic boom.” 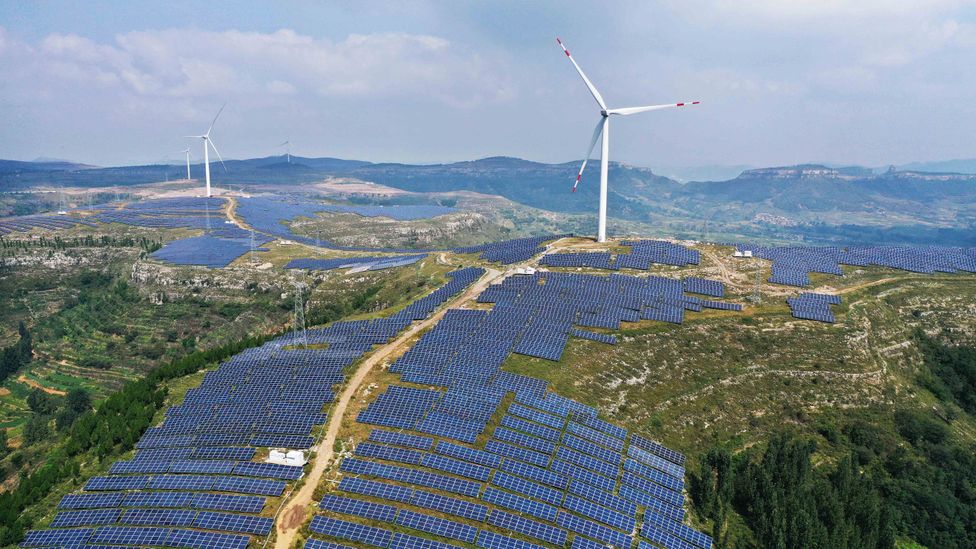 There is a similar anticipation in Germany, where the Rhine Valley is the centre of the country’s nascent geothermal lithium industry. Vulcan Energy Resources plans to pump hot geothermal brine to the surface, and use the heat to power its lithium extraction process, and feed excess back into the grid.

In November, Vulcan Energy Resources announced that its main site had significant reserves, with lithium concentrations of 181 milligrams per litre. It will carry out a full feasibility study in 2021, with the aim of scaling up to full commercial production of lithium in 2023-24. “We have a resource which is large enough to satisfy a very substantial amounts of the demand in the European markets here for many, many years to come,” Vulcan’s chief executive Francis Wedin told an industry conference in October.

The Rhine Valley is located in the heart of Germany’s car manufacturing region, a location that would give a lithium plant business advantages in supplying electric vehicle makers. But it also significantly reduces the carbon emissions associated with transporting lithium from overseas, Wedin noted. As a result, the firm plans to market its lithium as “zero carbon”.

Back in Cornwall, zero carbon is also the goal for Cornish Lithium’s production process, which it envisions will be powered by geothermal heat. And if its pilot project proves successful, Cornish Lithium is confident that plants could be developed across the region.

“All the clean technologies that we need to combat climate change – whether that’s wind turbines, solar panels or batteries, they’re all really, really mineral intensive,” says Crane. “We need to make sure we extract these materials as responsibly as possible otherwise it mitigates the reason for building these technologies in the first place.”

In all, it may still be a few years before batteries made using zero-emission lithium are powering your car, or other devices. But if zero-carbon lithium takes off in the way its champions hope, it could become a powerful example of a mineral essential for sustainable energy, obtained in a sustainable way.

This article was originally published by: https://www.bbc.com/future/article/20201124-how-geothermal-lithium-could-revolutionise-green-energy