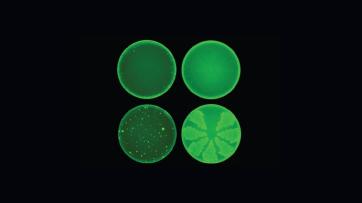 A pioneering machine-learning approach has identified powerful new types of antibiotic from a pool of more than 100 million molecules — including one that works against a wide range of bacteria, including tuberculosis and strains considered untreatable.

The researchers say the antibiotic, called halicin, is the first discovered with artificial intelligence (AI). Although AI has been used to aid parts of the antibiotic-discovery process before, they say that this is the first time it has identified completely new kinds of antibiotic from scratch, without using any previous human assumptions. The work, led by synthetic biologist Jim Collins at the Massachusetts Institute of Technology in Cambridge, is published in Cell1.

The study is remarkable, says Jacob Durrant, a computational biologist at the University of Pittsburgh, Pennsylvania. The team didn’t just identify candidates, but also validated promising molecules in animal tests, he says. What’s more, the approach could also be applied to other types of drug, such as those used to treat cancer or neurodegenerative diseases, says Durrant.

Bacterial resistance to antibiotics is rising dramatically worldwide, and researchers predict that unless new drugs are developed urgently, resistant infections could kill ten million people per year by 2050. But over the past few decades, the discovery and regulatory approval of new antibiotics has slowed. “People keep finding the same molecules over and over,” says Collins. “We need novel chemistries with novel mechanisms of action.”

Collins and his team developed a neural network — an AI algorithm inspired by the brain’s architecture — that learns the properties of molecules atom by atom.

The researchers trained its neural network to spot molecules that inhibit the growth of the bacterium Escherichia coli, using a collection of 2,335 molecules for which the antibacterial activity was known. This includes a library of about 300 approved antibiotics, as well as 800 natural products from plant, animal and microbial sources.

The algorithm learns to predict molecular function without any assumptions about how drugs work and without chemical groups being labelled, says Regina Barzilay, an AI researcher at MIT and a co-author of the study. “As a result, the model can learn new patterns unknown to human experts.”

Once the model was trained, the researchers used it to screen a library called the Drug Repurposing Hub, which contains around 6,000 molecules under investigation for human diseases. They asked it to predict which would be effective against E. coli, and to show them only molecules that look different from conventional antibiotics.

From the resulting hits, the researchers selected about 100 candidates for physical testing. One of these — a molecule being investigated as a diabetes treatment — turned out to be a potent antibiotic, which they called halicin after HAL, the intelligent computer in the film 2001: A Space Odyssey. In tests in mice, this molecule was active against a wide spectrum of pathogens, including a strain of Clostridioides difficile and one of Acinetobacter baumannii that is ‘pan-resistant’ and against which new antibiotics are urgently required.

Antibiotics work through a range of mechanisms, such as blocking the enzymes involved in cell-wall biosynthesis, DNA repair or protein synthesis. But halicin’s mechanism is unconventional: it disrupts the flow of protons across a cell membrane. In initial animal tests, it also seemed to have low toxicity and be robust against resistance. In experiments, resistance to other antibiotic compounds typically arises within a day or two, says Collins. “But even after 30 days of such testing we didn’t see any resistance against halicin.”

The team then screened more than 107 million molecular structures in a database called ZINC15. From a shortlist of 23, physical tests identified 8 with antibacterial activity. Two of these had potent activity against a broad range of pathogens, and could overcome even antibiotic-resistant strains of E. coli.

The study is “a great example of the growing body of work using computational methods to discover and predict properties of potential drugs”, says Bob Murphy, a computational biologist at Carnegie Mellon University in Pittsburgh. He notes that AI methods have previously been developed to mine huge databases of genes and metabolites to identify molecule types that could include new antibiotics2,3.

But Collins and his team say that their approach is different — rather than search for specific structures or molecular classes, they’re training their network to look for molecules with a particular activity. The team is now hoping to partner with an outside group or company to get halicin into clinical trials. It also wants to broaden the approach to find more new antibiotics, and design molecules from scratch. Barzilay says their latest work is a proof of concept. “This study puts it all together and demonstrates what it can do.”