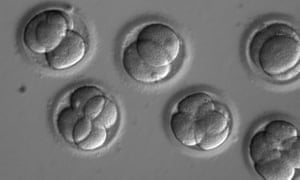 Stem cell biologist Hiromitsu Nakauchi has been waiting for this moment for more than a decade.

After years of planning, the persistent researcher has at last received approval from a government willing to pursue one of the most controversial scientific studies there is: human-animal embryo experiments.

While many countries around the world have restricted, defunded or outright banned these ethically-fraught practices, Japan has now officially lifted the lid on this proverbial Pandora’s box. Earlier this year, the country made it legal to not only transplant hybrid embryos into surrogate animals, but also to bring them to term.

As a lead stem cell researcher at the University of Tokyo and Stanford University, Nakauchi has gone from country to country, chasing his dream of one day growing customised human organs in animals like sheep or pigs.

With more than 116,000 patients on the transplant waiting list in the United States alone, Nakauchi hopes his idea can transform lives.

That ultimate goal is still a long way off, but the next step in his research has at last been given the green light by ministry officials in Japan. As the first researcher to receive government approval since the 2014 ban, Nakauchi plans on taking things slowly so that public understanding and trust can catch up.

“We don’t expect to create human organs immediately, but this allows us to advance our research based upon the know-how we have gained up to this point,” Nakauchi told The Asahi Shimbun.

The experiments will start by injecting human induced pluripotent stem cells into rat and mice embryos, all of which have been genetically manipulated so that they cannot make pancreases.

The goal is for the rodent embryo to use the human cells to build itself a pancreas, and for two years, the team plans on watching these rodents develop and grow, carefully monitoring their organs and brains in the process. Only then will the researchers ask for approval to do the same with pigs.

While human-animal embryos have been created in the past – such as pig-human embryos and sheep-human embryos – they’ve never been allowed to develop to term before.

One of the biggest fears with this type of research centers on exactly where these human stem cells actually go in an animal, and what type of cells they could develop into, once they are injected.

While Nakauchi and his team are trying to target this treatment to just the pancreas, if they detect more than 30 percent of the rodent brains are human, they will suspend the experiment. These are part of the government’s conditions to prevent a “humanised” animal from ever coming into existence.

Nakauchi, however, doesn’t think this is going to happen. Last year, he and his colleagues at Stanford successfully made the first human-sheep embryo, and although it was destroyed after just 28 days, the hybrid contained no organs and very few human cells – only about one in 10,000 or less.

“We are trying to ensure that the human cells contribute only to the generation of certain organs,” Nakauchi explained the winter edition of Stanford Medicine’s Out There.

“With our new, targeted organ generation, we don’t need to worry about human cells integrating where we don’t want them, so there should be many fewer ethical concerns.”

This article was originally published by: https://www.sciencealert.com/japan-just-gave-approval-for-scientists-to-work-on-human-animal-embryo-experiments