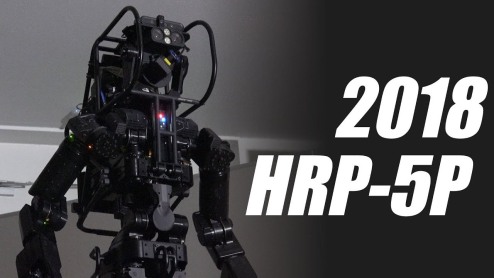 The HRP-5P is a humanoid robot from Japan’s Advanced Industrial Science and Technology institute that can perform common construction tasks including — as we see below — install drywall.

HRP-5P — maybe we can call it Herb? — uses environmental measurement, object detection and motion planning to perform various tasks. In this video we see it use small hooks to grab the wallboard and slide it off onto the floor. Then, with a bit of maneuvering, it’s able to place the board against the joists and drill them in place.

“By utilizing HRP-5P as a development platform of industry-academia collaboration, it is expected that research and development for practical use of humanoid robots in building construction sites and assembly of large structures such as aircraft and ships will be accelerated,” write the creators.

The researchers see the robot as a replacement for an aging population and a declining birth rate. “It is expected that many industries such as the construction industry will fall into serious manual shortages in the future, and it is urgent to solve this problem by robot technology,” the write. “Also, at work sites assembling very large structures such as building sites and assembling of aircraft / ships, workers are carrying out dangerous heavy work, and it is desired to replace these tasks with robot technology. However, at the assembly site of these large structures, it is difficult to develop a work environment tailored to the robot, and the introduction of robots has not progressed.”

Considering there are 6 million contractors in the U.S. alone, robots like this one could be a boon or a curse. What happens when we can easily replace humans in shipping, logistics and construction? Let’s just hope Herb here needs a supervisor.

This article was originally published by: https://techcrunch.com/2018/10/01/watch-this-humanoid-robot-install-drywall/?yptr=yahoo&guccounter=1