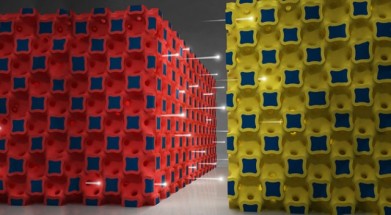 Cornell University engineers have designed a revolutionary 3D lithium-ion battery that could be charged in just seconds.

In a conventional battery, the battery’s anode and cathode* (the two sides of a battery connection) are stacked in separate columns (the black and red columns in the left illustration above). For the new design, the engineers instead used thousands of nanoscale (ultra-tiny) anodes and cathodes (shown in the illustration on the right above).

Putting those thousands of anodes and cathodes just 20 nanometers (billionths of a meter) apart allows for extremely fast charging** (in seconds or less) and also allows for holding more power for longer.

Left-to-right: The anode was made of self-assembling (automatically grown) thin-film carbon material with thousands of regularly spaced pores (openings), each about 40 nanometers wide. The pores were coated with a 10 nanometer-thick electrolyte* material (the blue layer between the black anode layer, as shown in the “Electrolyte coating” illustration), which is electronically insulating but conducts ions (an ion is an atom or molecule that has an electrical charge and is what flows inside a battery instead of electrons). The cathode was made from sulfur. (credit: Cornell University)

In addition, unlike traditional batteries, the electrolyte battery material does not have pinholes (tiny holes), which can lead to short-circuiting the battery, giving rise to fires in mobile devices, such as cellphones and laptops.

The engineers are still perfecting the technique, but they have applied for patent protection on the proof-of-concept work, which was funded by the U.S. Department of Energy and in part by the National Science Foundation.

Batteries have three parts. An anode (-) and a cathode (+) — the positive and negative sides at either end of a traditional battery — which are hooked up to an electrical circuit (green); and the electrolyte, which keeps the anode and cathode apart and allows ions (electrically charged atoms or molecules) to flow. (credit: Northwestern University Qualitative Reasoning Group)

This article was originally published by:  http://www.kurzweilai.net/revolutionary-3d-nanohybrid-lithium-ion-battery-could-allow-for-charging-in-just-seconds?utm_source=KurzweilAI+Weekly+Newsletter&utm_campaign=50d67a312d-UA-946742-1&utm_medium=email&utm_term=0_147a5a48c1-50d67a312d-282129417