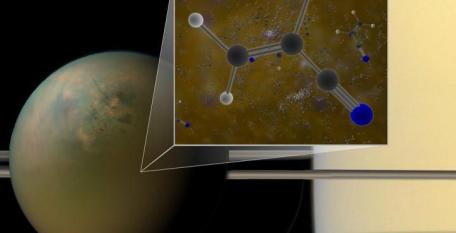 NASA researchers have found large quantities (2.8 parts per billion) of acrylonitrile* (vinyl cyanide, C2H3CN) in Titan’s atmosphere that could self-assemble as a sheet of material similar to a cell membrane.

Consider these findings, presented July 28, 2017 in the open-access journal Science Advances, based on data from the ALMA telescope in Chile (and confirming earlier observations by NASA’s Cassini spacecraft):

1. Researchers have proposed that acrylonitrile molecules could come together as a sheet of material similar to a cell membrane. The sheet could form a hollow, microscopic sphere that they dubbed an “azotosome.”

A bilayer, made of two layers of lipid molecules (credit: Mariana Ruiz Villarreal/CC)

2. The azotosome sphere could serve as a tiny storage and transport container, much like the spheres that biological lipid bilayers can form. The thin, flexible lipid bilayer is the main component of the cell membrane, which separates the inside of a cell from the outside world.

“The ability to form a stable membrane to separate the internal environment from the external one is important because it provides a means to contain chemicals long enough to allow them to interact,” said Michael Mumma, director of the Goddard Center for Astrobiology, which is funded by the NASA Astrobiology Institute.

3. Acrylonitrile condenses in the cold lower atmosphere and rains onto its solid icy surface, ending up in seas of methane liquids on its surface.

4. A lake on Titan named Ligeia Mare that could have accumulated enough acrylonitrile to form about 10 million azotosomes in every milliliter (quarter-teaspoon) of liquid. Compare that to roughly a million bacteria per milliliter of coastal ocean water on Earth.

Chemistry in Titan’s atmosphere. Nearly as large as Mars, Titan has a hazy atmosphere made up mostly of nitrogen with a smattering of organic, carbon-based molecules, including methane (CH4) and ethane (C2H6). Planetary scientists theorize that this chemical make-up is similar to Earth’s primordial atmosphere. The conditions on Titan, however, are not conducive to the formation of life as we know it; it’s simply too cold (95 kelvins or -290 degrees Fahrenheit). (credit: ESA)

6. A related open-access study published July 26, 2017 in The Astrophysical Journal Letters notes that Cassini has also made the surprising detection of negatively charged molecules known as “carbon chain anions” in Titan’s upper atmosphere. These molecules are understood to be building blocks towards more complex molecules, and may have acted as the basis for the earliest forms of life on Earth.

“This is a known process in the interstellar medium, but now we’ve seen it in a completely different environment, meaning it could represent a universal process for producing complex organic molecules,” says Ravi Desai of University College London and lead author of the study.

* On Earth, acrylonitrile  is used in manufacturing of plastics.

Recent simulations have indicated that vinyl cyanide is the best candidate molecule for the formation of cell membranes/vesicle structures in Titan’s hydrocarbon-rich lakes and seas. Although the existence of vinyl cyanide (C2H3CN) on Titan was previously inferred using Cassini mass spectrometry, a definitive detection has been lacking until now. We report the first spectroscopic detection of vinyl cyanide in Titan’s atmosphere, obtained using archival data from the Atacama Large Millimeter/submillimeter Array (ALMA), collected from February to May 2014. We detect the three strongest rotational lines of C2H3CN in the frequency range of 230 to 232 GHz, each with >4σ confidence. Radiative transfer modeling suggests that most of the C2H3CN emission originates at altitudes of ≳200 km, in agreement with recent photochemical models. The vertical column densities implied by our best-fitting models lie in the range of 3.7 × 1013 to 1.4 × 1014 cm−2. The corresponding production rate of vinyl cyanide and its saturation mole fraction imply the availability of sufficient dissolved material to form ~107 cell membranes/cm3 in Titan’s sea Ligeia Mare.

This article was originally published by:
http://www.kurzweilai.net/saturn-moon-titan-has-chemical-that-could-form-bio-like-membranes-says-nasa?utm_source=KurzweilAI+Weekly+Newsletter&utm_campaign=0ad261ad5e-UA-946742-1&utm_medium=email&utm_term=0_147a5a48c1-0ad261ad5e-282129417