Microsoft will ‘solve’ cancer within 10 years by ‘reprogramming’ diseased cells 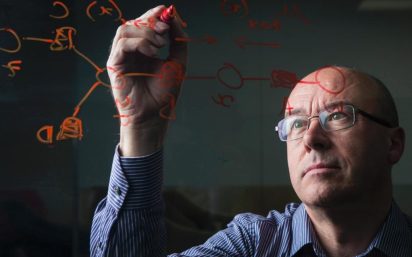 Microsoft has vowed to “solve the problem of cancer” within a decade by using ground-breaking computer science to crack the code of diseased cells so they can be reprogrammed back to a healthy state.

In a dramatic change of direction for the technology giant, the company has assembled a “small army” of the world’s best biologists, programmers and engineers who are tackling cancer as if it were a bug in a computer system.

This summer Microsoft opened its first wet laboratory where it will test out the findings of its computer scientists who are creating huge maps of the internal workings of cell networks.

The researchers are even working on a computer made from DNA which could live inside cells and look for faults in bodily networks, like cancer. If it spotted cancerous chances it would reboot the system and clear out the diseased cells.

Chris Bishop, laboratory director at Microsoft Research, said: “I think it’s a very natural thing for Microsoft to be looking at because we have tremendous expertise in computer science and what is going on in cancer is a computational problem.

“It’s not just an analogy, it’s a deep mathematical insight. Biology and computing are disciplines which seem like chalk and cheese but which have very deep connections on the most fundamental level.”

The biological computation group at Microsoft are developing molecular computers built from DNA which act like a doctor to spot cancer cells and destroy them.

Andrew Philips, head of the group, said: “It’s long term, but… I think it will be technically possible in five to 10 years time to put in a smart molecular system that can detect disease.”

The programming principles and tools group has already developed software that mimics the healthy behavior of a cell, so that it can be compared to that of a diseased cell, to work out where the problem occurred and how it can be fixed.

The Bio Model Analyser software is already being used to help researchers understand how to treat leukemia more effectively.

Dr Jasmin Fisher, senior researcher and an associate professor at Cambridge University, said: “If we are able to control and regulate cancer then it becomes like any chronic disease and then the problem is solved.”

“I think for some of the cancers five years, but definitely within a decade. Then we will probably have a century free of cancer.”

She believes that in the future smart devices will monitor health continually and compare it to how the human body should be operating, so that it can quickly detect problems.

“My own personal vision is that in the morning you wake up, you check your email and at the same time all of our genetic data, our pulse, our sleep patterns, how much we exercised, will be fed into a computer which will check your state of well-being and tell you how prone you are to getting flu, or some other horrible thing,” she added.

“In order to get there we need these kind of computer models which mimic and model the fundamental processes that are happening in our bodies.

“Under normal development cells divide and they die and there is a certain balance, the problems start when that balance is broken and that’s how we had uncontrolled proliferation and tumours.

“If we could have all of that sitting on your personal computer and monitoring your health state then it will alert us when something is coming.”

Patients undergoing radiotherapy could see treatment slashed from hours to just minutes with a new innovation to quickly map the size of a tumour.

Currently radiologists must scan a tumour and then painstakingly draw the outline of the cancer on dozens of sections by hand to create a 3D map before treatment, a process which can take up to four hours.

They also must outline nearby important organs to make sure they are protected from the blast of radiation.

But Microsoft engineers have developed a programme which can delineate a tumour within minutes, meaning treatment can happen immediately.

The programme can also show doctors how effective each treatment has been, so the dose can be altered depending on how much the tumour has been shrunk.

“Expert radiologists can look at an image – say a scan of someone’s brain – and be able to say in two seconds, ‘Yes, there’s a tumor. No, there isn’t a tumor. But delineating a tumour by hand is not very accurate.”

The system could eventually evaluate 3D scans pixel by pixel to tell the radiologist exactly how much the tumor has grown, shrunk or changed shape since the last scan.

It also could provide information about things like tissue density, to give the radiologist a better sense of whether something is more likely a cyst or a tumor. And it could provide more fine-grained analysis of the health of cells surrounding a tumor.

“Doing all of that by eye is pretty much impossible,” added Dr Criminisi.

The images could also be 3D printed so that surgeons could practice a tricky operation, such as removing a hard-to -reach brain tumour, before surgery.