Scientists are now contemplating the fabrication of a human genome, meaning they would use chemicals to manufacture all the DNA contained in human chromosomes.

The prospect is spurring both intrigue and concern in the life sciences community because it might be possible, such as through cloning, to use a synthetic genome to create human beings without biological parents.

While the project is still in the idea phase, and also involves efforts to improve DNA synthesis in general, it was discussed at a closed-door meeting on Tuesday at Harvard Medical School in Boston. The nearly 150 attendees were told not to contact the news media or to post on Twitter during the meeting.

Organizers said the project could have a big scientific payoff and would be a follow-up to the original Human Genome Project, which was aimed at reading the sequence of the three billion chemical letters in the DNA blueprint of human life. The new project, by contrast, would involve not reading, but rather writing the human genome — synthesizing all three billion units from chemicals.

But such an attempt would raise numerous ethical issues. Could scientists create humans with certain kinds of traits, perhaps people born and bred to be soldiers? Or might it be possible to make copies of specific people?

“Would it be O.K., for example, to sequence and then synthesize Einstein’s genome?” Drew Endy, a bioengineer at Stanford, and Laurie Zoloth, a bioethicist at Northwestern University, wrote in an essay criticizing the proposed project. “If so how many Einstein genomes should be made and installed in cells, and who would get to make them?”

Dr. Endy, though invited, said he deliberately did not attend the meeting at Harvard because it was not being opened to enough people and was not giving enough thought to the ethical implications of the work.

George Church, a professor of genetics at Harvard Medical School and an organizer of the proposed project, said there had been a misunderstanding. The project was not aimed at creating people, just cells, and would not be restricted to human genomes, he said. Rather it would aim to improve the ability to synthesize DNA in general, which could be applied to various animals, plants and microbes.

“They’re painting a picture which I don’t think represents the project,” Dr. Church said in an interview.

He said the meeting was closed to the news media, and people were asked not to tweet because the project organizers, in an attempt to be transparent, had submitted a paper to a scientific journal. They were therefore not supposed to discuss the idea publicly before publication. He and other organizers said ethical aspects have been amply discussed since the beginning.

The project was initially called HGP2: The Human Genome Synthesis Project, with HGP referring to the Human Genome Project. An invitation to the meeting at Harvard said that the primary goal “would be to synthesize a complete human genome in a cell line within a period of 10 years.” 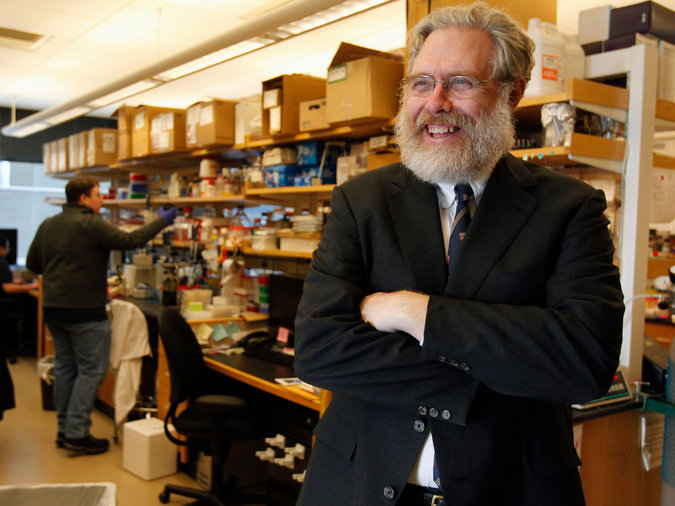 George Church, one of the organizers of the proposed project, at his lab at Harvard Medical School in 2013. Credit Jessica Rinaldi/Reuters

But by the time the meeting was held, the name had been changed to “HGP-Write: Testing Large Synthetic Genomes in Cells.”

The project does not yet have funding, Dr. Church said, though various companies and foundations would be invited to contribute, and some have indicated interest. The federal government will also be asked. A spokeswoman for the National Institutes of Health declined to comment, saying the project was in too early a stage.

Besides Dr. Church, the organizers include Jef Boeke, director of the institute for systems genetics at NYU Langone Medical Center, and Andrew Hessel, a self-described futurist who works at the Bay Area software company Autodesk and who first proposed such a project in 2012.

Scientists and companies can now change the DNA in cells, for example, by adding foreign genes or changing the letters in the existing genes. This technique is routinely used to make drugs, such as insulin for diabetes, inside genetically modified cells, as well as to make genetically modified crops. And scientists are now debating the ethics of new technology that might allow genetic changes to be made in embryos.

But synthesizing a gene, or an entire genome, would provide the opportunity to make even more extensive changes in DNA.

For instance, companies are now using organisms like yeast to make complex chemicals, like flavorings and fragrances. That requires adding not just one gene to the yeast, like to make insulin, but numerous genes in order to create an entire chemical production process within the cell. With that much tinkering needed, it can be easier to synthesize the DNA from scratch.

Right now, synthesizing DNA is difficult and error-prone. Existing techniques can reliably make strands that are only about 200 base pairs long, with the base pairs being the chemical units in DNA. A single gene can be hundreds or thousands of base pairs long. To synthesize one of those, multiple 200-unit segments have to be spliced together.

But the cost and capabilities are rapidly improving. Dr. Endy of Stanford, who is a co-founder of a DNA synthesis company called Gen9, said the cost of synthesizing genes has plummeted from $4 per base pair in 2003 to 3 cents now. But even at that rate, the cost for three billion letters would be $90 million. He said if costs continued to decline at the same pace, that figure could reach $100,000 in 20 years.

J. Craig Venter, the genetic scientist, synthesized a bacterial genome consisting of about a million base pairs. The synthetic genome was inserted into a cell and took control of that cell. While his first synthetic genome was mainly a copy of an existing genome, Dr. Venter and colleagues this year synthesized a more original bacterial genome, about 500,000 base pairs long.

Dr. Boeke is leading an international consortium that is synthesizing the genome of yeast, which consists of about 12 million base pairs. The scientists are making changes, such as deleting stretches of DNA that do not have any function, in an attempt to make a more streamlined and stable genome.

But the human genome is more than 200 times as large as that of yeast and it is not clear if such a synthesis would be feasible.

Jeremy Minshull, chief executive of DNA2.0, a DNA synthesis company, questioned if the effort would be worth it.