Elon Musk: We need to leave Earth as soon as possible 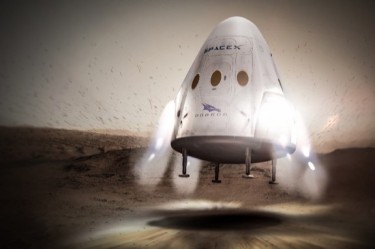 In all the billions and billions of planets in our home galaxy, humanity happens to find itself on one perfectly suited for life.

Earth isn’t without its hazards though. The planet has seen five mass extinctions throughout its history, due to cataclysmic disasters like giant asteroids and massive volcanic eruptions.

Billionaire entrepreneur Elon Musk is worried about the next apocalypse.

He’s so concerned that he thinks we need to get off Earth and become a multi-planet species as quickly as possible, according to a post written by blogger Tim Urban called “How (and Why) SpaceX Will Colonize Mars.”

Musk’s reasoning is straightforward. Maybe by the time the next giant asteroid heads our way, we’ll have the technology to shield the planet or redirect the space rock. But if it’s something more catastrophic, like a nearby star exploding, we may all get vaporized. Musk says we can’t afford to wait around and find out.

In his blog post, Urban gives us another way to think about it: Imagine Earth as a hard drive, and every species is a word document saved on that hard drive. The hard drive has already crashed five times (those five mass extinctions), and each time it loses a huge chunk of those documents (species going extinct). So you can think of the human species as an incredibly valuable document created on that hard drive:

Now—if you owned a hard drive with an extraordinarily important Excel doc on it, and you knew that the hard drive pretty reliably tended to crash every month or two, with the last crash happening five weeks ago—what’s the very obvious thing you’d do? You’d copy the document onto a second hard drive.

That’s exactly why Musk is so hell-bent on Mars — it could become humanity’s backup drive.

Musk doesn’t want to send a handful of colonists, either; he’d like to launch 1 million people to the red planet. If we want anything resembling the industry and infrastructure here on Earth, and ample genetic diversity, then we’ll need at least that many people to get things going. That’s the only way we’ll survive as a species on Mars, Musk reportedly told Urban.

Later this year, via his rocket company SpaceX, Musk plans to reveal a spacecraft designed to carry as many as 100 people at a time to the red planet.