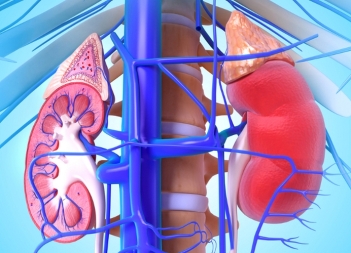 Just like you would hope, something very cool was revealed at the 2015 Experimental Biology conference in Boston: the biomedical company Organovo showed off its technique for 3D printing human kidney tissue.

Organovo has been working on printing functional human tissue since being incorporated in 2007, and first printed a cellular blood vessel in 2010. Since January 2014, it has offered bioprinted liver tissue (marketed as exVive3D™ liver tissue) for companies to use in drug trials and disease modeling, and it looks as though its bioprinted human kidney tissue will be used for the same tasks, starting sometime in the latter half of 2016.

“Kidney represents an ideal extension of capabilities to 3D bioprint organ tissues that can be tremendously useful in pharmaceutical research,” Keith Murphy, Organovo’s chairman and CEO, said via press release. “The product that we intend to build from these initial results can be an excellent expansion for our core customers in toxicology, who regularly express to us an interest in having better solutions for the assessment of human kidney toxicity.”

Organovo’s website has a video that sort of explains how they take human cells and put them into, in this case, a matrix to grow into human tissue. An email with follow-up questions has yet to be answered, but as the Wall Street Journal explained in February, Organovo prints organs in much the same way, putting cells in as “bio-ink” and then printing them in layers, initially held together by hydrogel until the cells grow together.

The most common type of kidney cancer is renal cell carcinoma, so it’s probably no surprise that Organovo demonstrated how it printed multiple “tissue-relevant cell types” to recapitulate the renal tubes themselves.

So far Organovo’s 3D-printed liver tissue is used for preclinical drug trials, because the tissue responds like a real life human liver would for 42 days. That’s much longer than the single layers of cells previously used in tests, which wilt in a few days. There are mixed views on how far off printing functional organs for transplant is. Growing tissue is one thing, but growing an organ and integrating it into a living body is another.

“Everybody’s dream is the 3D-printed organ. Are we ever going to get there?” asked Gabor Forgacs, whose research forms the basis of Organovo’s method. “I’m not so sure,” he told the Select Biosciences Tissue Engineering & Bioprinting Conference, which was also held in Boston.

In the course of his keynote speech Forgacs argued that there was no reason functional organs couldn’t be made eventually, but that printing replacement organs on demand was still decades away.

With the cost of bringing new drugs to market extremely high, and the price being passed on to consumers in dramatic and unfortunate ways, lowering the cost of pharmaceutical tests is still very useful. Like biopaper covered in collagen and a protein matrix, it’s a place to grow.