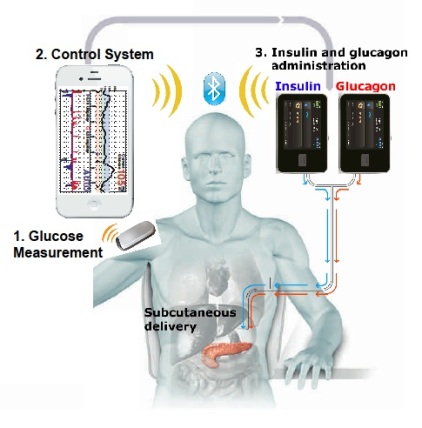 Ed Damiano’s son was diagnosed with type 1 diabetes in 2000. He was 11 months old. Damiano, a biomedical engineer, decided to create a device that would help his child and millions of others better manage their disease. He set a goal of having it ready by the time his son went to college.

Results from the latest clinical trials of his smartphone-linked artificial pancreas suggest he might just make that deadline.

Type 1 diabetes occurs when beta islet cells in the pancreas die off. These cells sense levels of blood sugar, aka glucose, in the blood and secrete the necessary amount of insulin to keep those levels normal. Insulin also enables glucose to enter our body’s cells, where it is used as a source of energy. This means an imbalance in blood sugar not only starves blood vessels and organs of energy but also keeps the blood saturated with glucose, which can cause tissue damage and sometimes lead to coma or even death.

The disease usually occurs early in life and can be managed through careful monitoring of blood insulin levels, controlling what food is eaten and when, modifying physical activity, and the use of pumps or injections to deliver insulin and the glucose-raising hormone glucagon to keep blood sugar levels within a normal range.

An app for that

But controlling the disease is all-consuming, lurking in the back of every waking decision. Damiano, who works at the University of Boston, says a bionic pancreas his team has developed with colleagues at the Massachusetts General Hospital offers hope of a normal life to people with type 1 diabetes.

The device takes over the task of monitoring and regulating sugar levels in the blood. Every 5 minutes, a signal is sent wirelessly from a glucose monitor under the user’s skin to an iPhone app, giving their blood-sugar status. The app calculates the amount of insulin or glucagon needed to balance blood sugar, sending a signal to pumps carried by the user to administer the required dose via a catheter. Before eating, people can input data about the type and size of their meal.

The artificial pancreas performed well in hospital-based clinical trials in 2010. But the important test is whether it works in a real-world environment. In the latest study, 20 adults wearing the device were put up in a hotel for five days but were otherwise free to do as they chose, including eat in restaurants and go to the gym. Thirty-two young people, aged 12 to 20, were also monitored for five days at a summer camp for kids with diabetes. For both groups, the results with the bionic pancreas were compared with five days of the participants using their usual method of controlling the disease – pricking their finger to monitor glucose levels and using an insulin pump, that requires them to manually calculate the dosage.

“The device performed beyond our expectations, it did a wonderful job of controlling their blood sugar,” says Damiano. Both the highs and lows of sugar levels were better controlled than what the participants were able to do managing their own diabetes prior to the trial, he says.

That is important because as many studies have shown, the better you control your glucose, the closer it is to normal range, the longer you can stave off the long-term health complications of diabetes, says Damiano.

The study had a tremendous emotional impact on participants. “They got a glimpse of life without diabetes, and that is pretty profound,” he says. In many cases, the participants were reluctant to give the devices back, he says.

Anna Floreen participated in the adult arm of the study and blogged about her experience: “I went to Starbucks and ate a banana for breakfast without fear of not enough time having passed between [insulin injection] and food consumption and wondering whether or not the 20 minute brisk walk to work would drop my blood sugar in 2 hours!”

“It’s fantastic that research on the artificial pancreas is forging ahead, both in the US and in the UK,” says Alasdair Rankin, director of research at Diabetes UK, a charity which is supporting the development of a similar device with researchers at the University of Cambridge. “Clearly more work will be needed before these systems can be used independently at home as a routine treatment option, but there is now real hope that this technology has the potential to transform the lives of people with type 1 diabetes within a generation,” he says.

Damiano hopes that a series of longer trials starting this month and next year will lay the path for the device to be approved by the US Food and Drug Administration. With any luck, this may come to pass before his son heads off to college – in the autumn of 2017.

The results of Damiano’s study and several other groups working on artificial pancreases were presented today at the meeting of the American Diabetes Association in San Francisco.