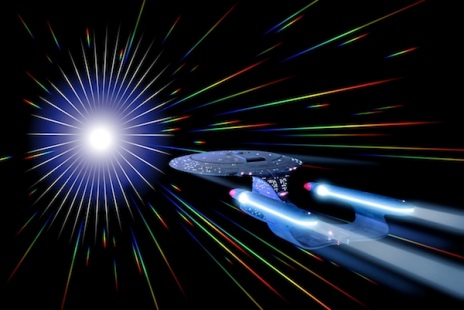 As any avid Star Trek fan can tell you, the eccentric physicist Zefram Cochrane invented the warp-drive engine in the year 2063. It wasn’t easy. Cochrane had to contend with evil time-traveling aliens who were determined to stop him from building the faster-than-light propulsion system (see the 1996 movie Star Trek: First Contact for details). But in the end he succeeded, and centuries later his warp drive powered the interstellar voyages of the starship Enterprise.What Star Trek fans may not know is that a physicist in the real world—specifically, at NASA’s Johnson Space Center in Houston—is investigating the feasibility of building a real warp-drive engine. Harold “Sonny” White, head of the center’s advanced propulsion program, has assembled a tabletop experiment designed to create tiny distortions in spacetime, the malleable fabric of the universe. If the experiment is successful, it may eventually lead to the development of a system that could generate a bubble of warped spacetime around a spacecraft. Instead of increasing the craft’s speed, the warp drive would distort the spacetime along its path, allowing it to sidestep the laws of physics that prohibit faster-than-light travel. Such a spacecraft could cross the vast distances between stars in just a matter of weeks.

For readers and writers of science fiction, this is extraordinary news. It doesn’t really matter that other physicists scoff at White’s idea, arguing that it’s impossible to alter spacetime in this way. Nor does it matter that NASA has allocated only $50,000, a mere smidgeon of the space agency’s $18 billion budget, to the warp-drive research. What makes White’s project so exciting is the immensity of the challenge. It’s heartening to know that even in this era of fiscal belt-tightening, the federal government is willing to place a small bet on the big dream of interstellar travel.

A surprising number of scientists, engineers and amateur space enthusiasts fervently believe in this dream. They’ve shared their hopes and hypotheses at academic conferences. They’ve founded organizations—the 100 Year Starship project, the Tau Zero Foundation, Icarus Interstellar—that seek to lay the groundwork for an unmanned interstellar mission that could be launched by the end of the century. Their ardor has grown in recent years as astronomers have detected a slew of Earthlike planets orbiting stars that are relatively near our sun. A few dozen of these worlds occupy the so-called “Goldilocks zone” around their stars—they’re neither too hot nor too cold to support life. If further observations confirm the existence of a habitable, idyllic planet in our corner of the galaxy, how could we resist sending an interstellar probe to explore this strange new world?

The problem is getting the spacecraft there in a reasonable amount of time. Believe it or not, NASA already has a probe that’s crossing the space between stars: Voyager 1, the plucky 1,600-pound craft launched in 1977 to investigate Jupiter, Saturn and their moons. After completing its primary mission the probe zipped past the outer planets, and in 2012 it left the solar system and entered interstellar space. Voyager has traveled almost 12 billion miles since its launch and is now zooming away from us at 38,610 miles per hour. But even at that blistering speed it would take at least 70,000 years to reach any of the nearby stars that might harbor habitable planets. Researchers need to make some serious breakthroughs in spacecraft propulsion to get there faster.

Although White and a few other scientists are tantalized by the possibility of warp drive, most of the interstellar enthusiasts have focused their attention on technologies that are less hypothetical. Icarus Interstellar, for example, is coordinating a study of a proposed mission that would use fusion power—the energy produced by slamming atomic nuclei together—to propel the spacecraft. Nuclear fusion is what gives the hydrogen bomb its bang, and if the energy is properly controlled and harnessed it could accelerate a probe to phenomenal speeds, thousands of times faster than Voyager 1. But researchers have been trying to build a fusion power plant for the past fifty years without much success. The technology hasn’t proved itself on Earth yet, and it’s certainly not ready to be installed in a spacecraft.

Another big problem is interstellar dust. Although the dust grains in deep space are microscopic, they’ll cause plenty of damage to a probe that’s barreling into them at millions of miles per hour. The spacecraft would have to be equipped with heavy shielding, which would increase the amount of fuel needed to accelerate the craft. And then there’s the need to decelerate the probe before it reaches its destination. There’s no point in sending a spacecraft on a hundred-year journey to a nearby star if it’s going to whiz right past the star’s habitable planets. During the later stages of its voyage the probe would have to turn its engines around and fire them in the opposite direction to slow itself down. But then the spacecraft would need to carry an even heavier load of fuel.

The complications seem as endless as space itself. The tremendous difficulty of interstellar flight may help explain the famous paradox first noted by physicist Enrico Fermi in 1950: if intelligent life is common in the universe, where are all the aliens? Perhaps extraterrestrials have never visited Earth because it’s just too hard to get here.

Nevertheless, the dream of interstellar travel remains stubbornly alive. Last September the 100 Year Starship project held a symposium on the topic just a month after Icarus Interstellar hosted its own conference. At a time when NASA is struggling to fund all its priorities—building a new launch system for its astronauts, sending new probes to Mars—planning for an interstellar mission may seem absurdly premature. But advocates such as Jill Tarter, who pioneered the effort to hunt for radio signals from extraterrestrial civilizations, argue that exploring other star systems is essential to humanity’s long-term survival. As long as the human race is confined to Earth we’re at high risk of extinction from a planetary catastrophe—a nuclear war, a pandemic, an asteroid impact and so on. The only other world in our solar system that comes even close to being habitable is Mars, and it would take hundreds of years of climate engineering to make the Red Planet livable for humans.

So the ultimate fate of our species may lie among the stars. Perhaps in a thousand years or so our civilization will look something like Star Trek’s United Federation of Planets. To reach that point, though, we need to adopt the motto of the starship Enterprise. We have “to boldly go where no man has gone before.”

About the Author: Mark Alpert is the author of The Furies, a new science thriller from Thomas Dunne Books/St. Martin’s Press. His earlier thrillers—Final Theory, The Omega Theory and Extinction—have been published in 23 languages. Follow on Twitter @AlpertMark.