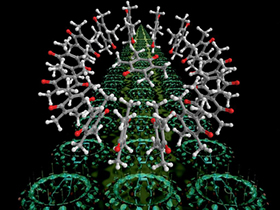 (Phys.org) —A team of researchers at Bar-Ilan University in Israel has successfully demonstrated an ability to use strands of DNA to create a nanobot computer inside of a living creature—a cockroach. In their paper published in Nature Nanotechnology, the researchers describe how they created several nanobot structures using strands of DNA, injected them into a living cockroach, then watched as they worked together as a computer to target one of the insects cells.

Prior research has shown that DNA strands can be programmable, mimicking circuits and even solving simple math problems. The team in Israel has now extended that work to show that such programmability can be used inside of a living organism to perform work, such as destroying cancer cells.

DNA strands can be programmed because of their natural tendency to react to different proteins. In this new effort, the team unwound DNA strands and then tied them together in an origami type box structure. The box was then “filled” with a single chemical molecule. Next, other such objects were created for the purpose of interacting with both the box structure and certain proteins found inside of the cockroach. The whole point was to create multiple scenarios in which the box would open automatically upon colliding with certain proteins. Adding multiple nanostructures allows for increasing the number of possibilities. For example, if the box structure will only open if it encounters three kinds of proteins, one made naturally by the cockroach, and two others carried by two different DNA origami structures. By mixing the combinations, it’s possible to cause the box to open using logic operations such as AND, OR, NOT (where the box will not open if a certain protein is present) etc., and that of course means that computational operations can be carried out—all inside of a living organism.

In their study, the researchers filled the origami box with a chemical that binds with hemolymph molecules, which are found inside a cockroach’s version of a bloodstream. All of the injected nanobots were imbued with a fluorescent marker so that the researchers could follow their progress inside the cockroach. They report that their experiments worked as envisioned—they were able to get the box to open or not, depending on the programming of the entire fleet of nanobots sent into the insect on multiple occasions under a variety of scenarios. Cleary impressed with their own results, the team suggests that similar nanobot computers could be constructed and be ready for trial in humans in as little as five years.